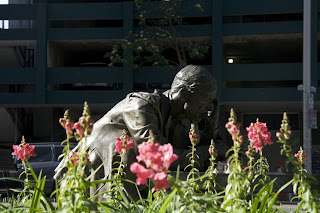 The title might give people the notion that I am against parks. The case I want to make is that parks placed in cities need a bit of planning, foresight and sensitive design in order for them to be a healthy part of the community environment that people would actually want to spend time in.

Century Gardens, to help the 99% of us (me included) who would not know the park by its name, is located between 7th and 8th Avenue SW in Downtown Calgary. It is just east of 8th Street, which is known for its "Scary" Mac's convenience store. The neighbourhood is often rife with drug dealers and I have regularly had to walk the gauntlet of weed? whisperers who bide their time there.

Currently Century Gardens is not in the best shape it has been in but that is not to say that there has been a sudden demise. Quite simply there is construction pending north of the park along 7th Avenue and the water that once ran through the park has not been turned on. Despite that and the preparations for the seemingly imminent demolition of nearby buildings, the park has never struck me as a friendly and welcoming place.

Despite the chess player and playing family statuary, the cement walls of the fountain that presents the park to most passers-by do not make the park very welcoming. The towers to the immediate east and south of the building keep it dark for most of the morning as well.

When I visited the park at 10am on a Saturday morning I was presented with the sight of a man public urinating against the cement. The cement fortress that separates the west end of the park from 8th Street also has enough nooks and crannies for people to hide if they so choose. During the time that I hung out in the park, two couples happened to enter the park, but neither of them were motivated to actually sit and pass some time there. When I left to head east on 8th Avenue, I noticed a homeless person sprawled on the grass, his sleep about to be interrupted by two of Calgary's finest who happened to be walking the beat.

While Century Gardens might have a bit more activity in the afternoon when the light hits it and perhaps even during weekdays when there is more pedestrian traffic in the area, there might be more life in the park. People might also argue that the impending construction might have also discouraged visitors from coming, but I really haven't seen a lot of pedestrian traffic in the area. There are at least three apartment towers within a 25 metre radius of the park but it does not seem that any of those residents are drawn to the park.

Whatever the good intentions for Century Gardens when it was built, it probably has not served its purpose effectively. If the construction in that area fills the park with something else I for one won't miss it. If on the other hand the construction leaves it untouched, I doubt the park itself will be revitalized.
Posted by Pat at 9:46 PM