Walking Downtown Calgary - The 1st of 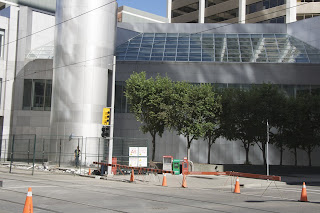 It is a well known fact that the downtown area of Calgary, or the Central Business District to define it more accurately, is all but dead outside of the 9-5 Monday to Friday workday. It is easy to cite the fact that the business orientation of the downtown area as part of the problems with the level of activity that exists there.

Stephen Avenue, at least from MacLeod Trail to 4th or 6th Avenue South is an active pedestrian area that has a wealth of restaurants and cultural assets the keep people there after work, even with the loss of McNally and Robinson bookstore last summer. The problem, however, is that Stephen Avenue is a small island of activity in the downtown area and little trickles from there either north or south.

One of the biggest problems with the downtown area is that Stephen is isolated somewhat by the trainlines on 7th Avenue S and just south of 9th Avenue S. In the case of the LRT running on 7th Avenue a great deal of pedestrian traffic is brought downtown needless to say, but there is little on the street to invite people to stay and walk the area. The C-Train stations bring a lot of traffic but most of it gets off 7th Avenue rather quickly. This is not the fault of the stations themselves but rather the places that are accessible via 7th Avenue.

Centre Street station for instance faces the back of the Telus Convention Centre and there is little reason to stick around that area. Moving west from there, the rundown pawn shops and convenience stores are more likely to scare off than invite pedestrian traffic. However, even the more reputable businesses invite traffic. The Bank of Montreal building on the north side of 7th is a dead space that fills nearly a whole block except for the cemented "park" just to the east of it. Further west, other office towers provide little access to 7th Avenue. One tower on the NW corner of 7th and 7th offers a blank wall to that corner and pedestrians have to head north to enter that building. Even without the construction that is currently taking place there, the blank wall and trees give people no reason to stick around.

Combined, the elements on 7th Avenue give little reason for pedestrians to walk along the east-west stretch of the street. Most of the traffic would tend to head north-south or head inside to take advantage of the Plus 15 system. It seems very much like a psychological barrier (at least) to walking along 7th Avenue. It might be enough to influence the direction of pedestrian traffic on the other avenues to the north as well.

The newer configurations of the C-Train platforms are much airier and open than their predecessors and that has already shown promise of meaningful integration into the street life, especially at Art Central, but there still needs to be more to be done to make 7th more attractive and inviting to pedestrians.

I'll continue to examine other parts of the downtown area in other posts.
Posted by Pat at 2:05 PM