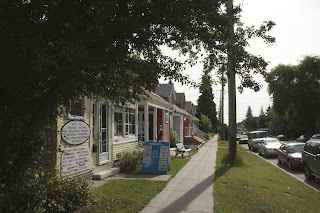 In the great discussion of what shape Calgary ought to take in the future Marda Loop and Garrison Woods have often been cited as examples of how the city could develop itself.

The first thing that I noticed was the complete absence of borders separating one neighbourhood from the next. There is little visible separation between Altadore, Mount Royal and Richmond and that borderless permeability from one community to the next has to be part of its charm and liveability.

The word permeability continues to echo as so many aspects of the Loop and Garrison Woods added definition to the concept in a way that sharply contrasted to suburbs like Rocky Ridge, Royal Oak and Tuscany, which are all separated from one another and from their closest amenities.

A walk down 33rd Avenue SW saw residential neighbourhoods blend into a pleasant commercial and retail area. For the most part the businesses were local rather than parts of chains. The few chains that were represented were usually fastfood outlets that were tamed from putting their most garish signs in the middle of the streetscape. As I got closer to Crowchild Trail, there was a Petro Canada and a turn south took me into Garrison Woods.

Among the pleasant touches in GW were the way the Safeway and its parking lot were hidden from view by a small commercial/retail strip. (I should add that "strip" does not do that building justice.) I have nothing against supermarkets, but their parking lots create a bit of dead space, no matter how full they happen to be. The placement of the retail space allowed it to share the parking with the Safeway rather than distance itself from the sidewalk with another parking lot of its own. The neighbourhood was quite busy with pedestrians for a Friday morning. The coffee shop was a convenient place to get the kids out for a walk and a snack before plotting the rest of the day or weekend. People knew one another on only a casual basis but were willing to reintroduce themselves and maintain or build connections.

Getting beyond the tonier new businesses in Garrison Woods, it was interesting to see how others had transformed a handful of houses from another era into quaint boutiques. Too small to suit modern appetites for space, a string of houses have found extended life as business establishments selling crafts, pet supplies, and such, preserving a bit of the neighbourhood's heritage and diversity while providing new entrepreneurs a toehold in the area.

That diversity again brings me back to that theme of permeability. There is no appearance of an insisted-upon standard to assert an ideal of what the neighbourhood ought to be. There are homes that immediately conjure thoughts of gardening grandparents and others a block away that suggest that young urbanites have found their suitable starter infill. If they wish, the diversity is such that if they are inclined to move to a bigger home as their needs change, they can do it without looking too far away.

The various diversities in this neighbourhood, with the age, style and purpose of the architecture, types of businesses, age groups and income levels of people are ample reason for it to be the example that it is for the rest of the city to consider.
Posted by Pat at 6:49 PM