A quote re Oil 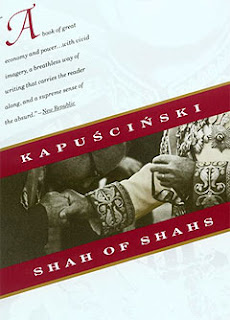 The following quote is from Shah of Shahs an account by Ryszard Kapuscinski of the Islamic Revolution in Iran in 1979. Maybe, just maybe, people will find echoes of this in their own experiences with oil-sated governments closer to home...

Oil kindles extraordinary emotions and hopes, since oil is above all a great temptation. It is the temptation of ease, wealth, strength, fortune, power. It is a filthy, foul-smelling liquid that squirts obligingly up into the air and falls back to earth as a rustling shower of money. To discover and possess the source of oil is to feel as if, after wandering long underground, you have suddenly stumbled upon royal treasure. Not only do you become rich, but you are also visited by the mystical conviction that some higher power has looked upon you with the eye of grace and magnanimously elevated you above others, electing you its favorite. Many photographs preserve the moment when the first oil spurts from the well: people jumping for joy, falling into each other’s arms, weeping . Oil creates the illusion of a completely changed life, life without work, life for free. Oil is a resource that anaesthetizes thought blurs vision, corrupts. People from poor countries go around thinking: God if only we had oil! The concept of oil expresses perfectly the eternal human dream of wealth achieved through lucky accident, through a kiss of fortune and not by sweat, anguish, hard work. In this sense, oil is a fairy tale and, like every fairy tale, a bit of a lie. Oil fills us with such arrogance that we begin believing we can easily overcome such unyielding obstacles as time.... Oil, though powerful has its defects. It does not replace thinking or wisdom. For rulers, one of its most alluring qualities is that it strengthens authority. Oil produces great profits without putting a lot of people to work. Oil causes few social problems because it creates neither a numerous proletariat nor a sizable bourgeoisie. Thus the government, freed from the need of splitting the profits anyone, can dispose of them according to its own ideas and desires. Look at the ministers from oil countries, how high they hold their heads, what a sense of power they have, they, the lords of energy, who decide whether we will be driving cars tomorrow or walking.
Posted by Pat at 5:58 AM